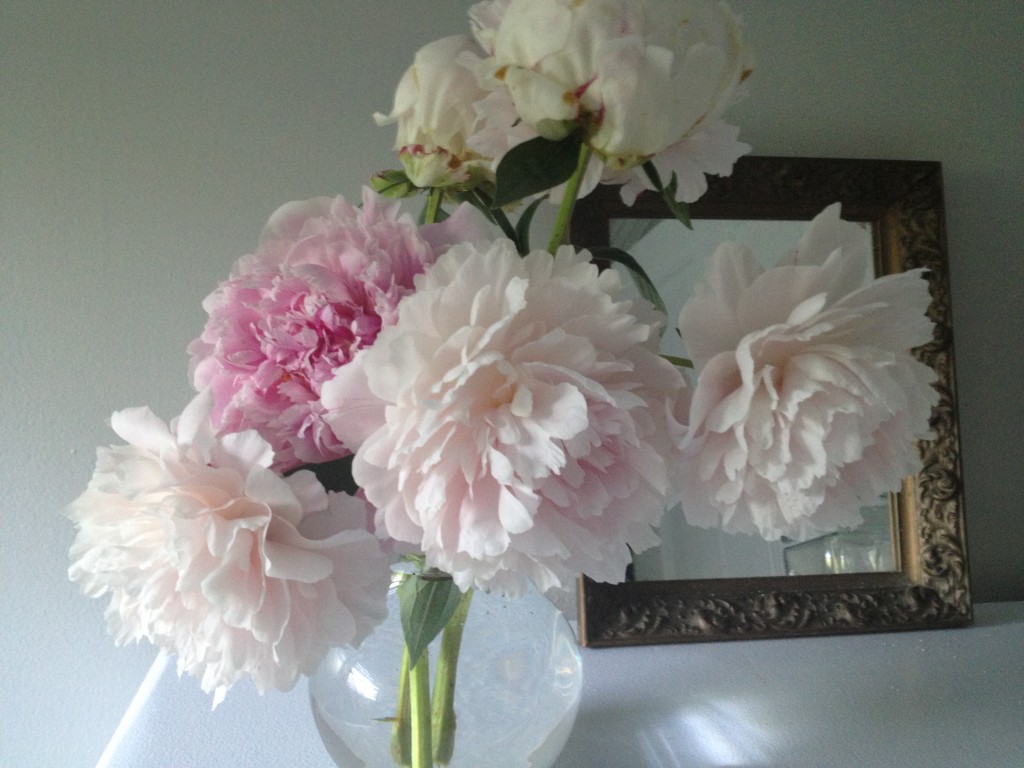 Pink peonies from the garden.

I’ve been musing upon a wedding post for Corks & Cake for a few days now.  It is wedding season after all and it would be timely to write, maybe in two parts.

At first I thought I’d do a funny “you know you are a Bridezilla if…” but that’s been done to death.

Since our 19th (gulp) anniversary is coming up, I was thinking about our wedding and thinking about how stressed we were planning it and how happy we were on the day.  What would I tell my bride-self now? Would anything that I learned then or since during 19 years (gulp again) of marriage be helpful, inspirational, wise, funny, a cautionary tale? 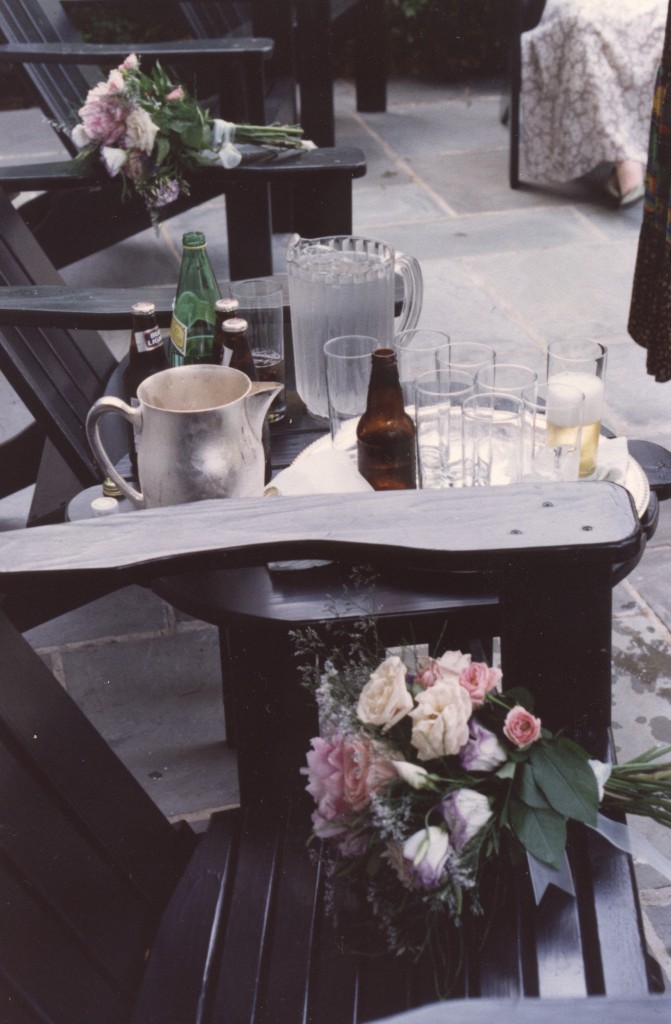 For example, I can’t for the life of me remember the flavor of our wedding cake.  Very ironic considering how obsessed I was with the food and catering.  And it was so long ago we didn’t have all the new-fangled technology and tools brides today have at their disposal for a flawless wedding day. 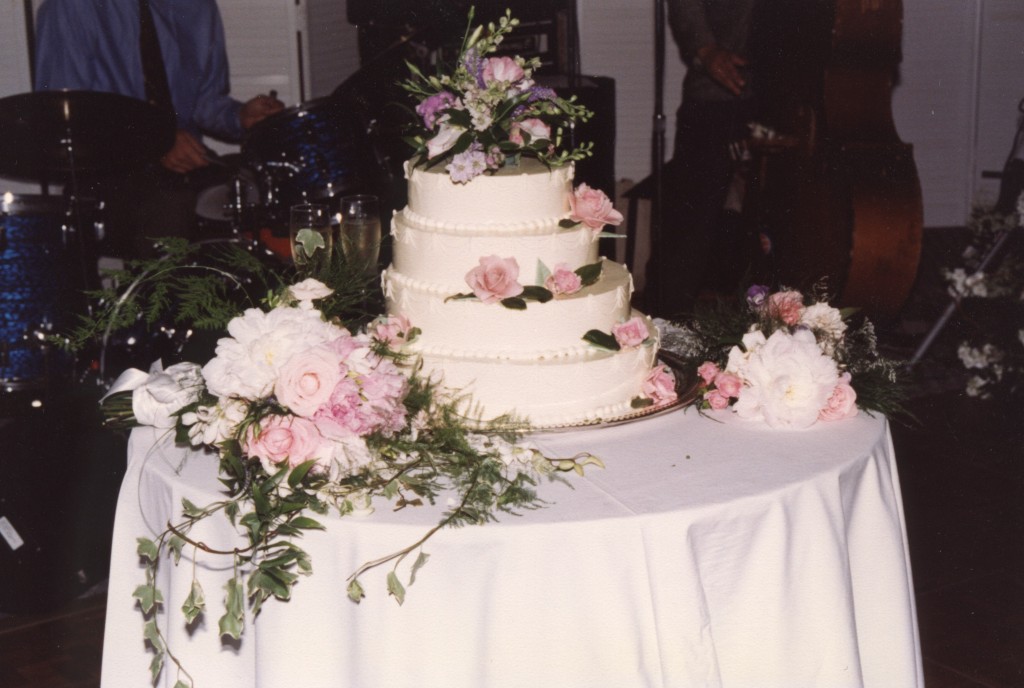 Pretty but what did it taste like? Flavor memory, lost.

My out-of-town family were late for the ceremony (except for my sister) and my mother-in-law-to-be was having a conniption. Somehow they got lost in the 5 miles from the hotel to the chapel and there were no CELL PHONES to call anyone to see where the heck they were.  It was the hottest day of the year (96 degrees in the shade) and I had a sorbet course in addition to cake.  Everyone including the caterer said another dessert was not necessary because there would be cake, but I insisted.  I wanted sorbet!  It melted in the kitchen and came out as a very pretty sorbet soup.  But it didn’t really matter, because as John recalls, we didn’t get to eat any food.  Now THAT’S ironic, we laughed.  I should tell the modern day bride not to obsess about her reception food because even though she’ll have to pay for it, she won’t have time to eat any of it.

Look what I caught! Boy, my face is gonna hurt the next day.

I asked John what else he remembers.  He remembers that his face hurt the next day and at first he didn’t know why.  Then he realized that his face muscles hurt because he could not stop smiling for 8 hours. (Good answer, JP.)

He remembers that we picked a waltz for our first dance and 10 minutes before we were cued to do that, we realized we DID NOT KNOW HOW TO WALTZ.  One our groomsmen, Hal, had actually taken Arthur Murray dance lessons in high school (part of his Cotillion training, I think) and he gave us a crash course in the hall.  1,2,3, 1,2,3.  We were laughing quite giddily.  John also remembers (besides being hungry) that we fed the band (who were pals of his) what the guests were having, rather than sandwiches in the kitchen.  They were beyond grateful. They were an excellent band called the Hula Monsters (a swing band with a Hawaiian flavor you can still hire today).  Now John plays in a new band with one of the members (shout out to The Yachtsmen) and sadly, the founding musician of the Hula Monsters died recently from complications of cancer.

That brought us to the sad realization (as it did while I was looking through the photographs) that many of our family members and friends who were with us on that day looking so happy are no longer with us:  John’s parents, my mom, his Aunt Sophie, many of Eleanor’s friends, Dave Giegerich (the Hula Monster.)

Rebecca and her dear mom, on the day.

I guess what I’d tell my bride-self today (or a modern day bride-to-be) would be not to sweat the small stuff.  Someone will be late and hold up the ceremony.  The ice cream might melt.  The weather might suck.  You won’t get to eat the food.  But remember to hug everyone, let them shower you with well wishes, tell them you love them and thank them for coming.  It’s just a blip in time and no one lasts forever.

What would you tell your bride-self today?