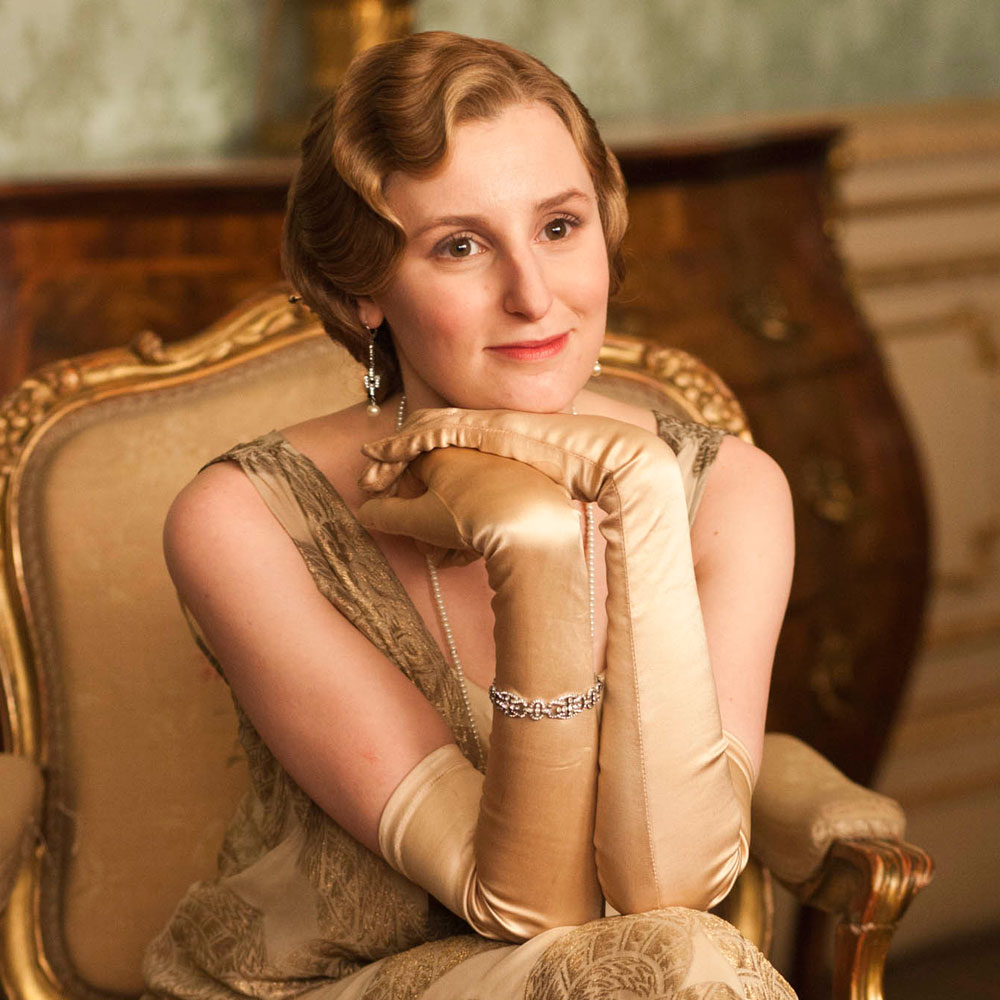 I am rooting for Lady Edith this final season.  After 5 seasons of misery, being jilted at the altar, having to give away her baby, then getting the child back only to have to hide her motherhood, losing Gregson, suffering the jibes of Lady Mary (really, Mary, just stop it) and on and on, this woman needs some happiness.

I have never gotten the gist of why her family talks about her as the ‘plain’ one, the one destined to be a spinster and take care of them in their old age, when on-screen actress Laura Carmichael is lovely and Lady Edith’s clothes are as glamorous and well-turned out as Mary’s.  Her Eeyore attitude; that is something she can work on.

Another thing I am loving about this final season is that both Lady Mary and Lady Edith have jobs!  I hope Edith takes up her chic flat in London and her publishing CEO job and tells Lady Mary to suck it.

To whet your appetite for some of the career gal/aristocrat fashions to come, here are some of the costumes that were on tour last year in the U.S. at Winthertur Museum’s “Costumes of Downton” exhibit. 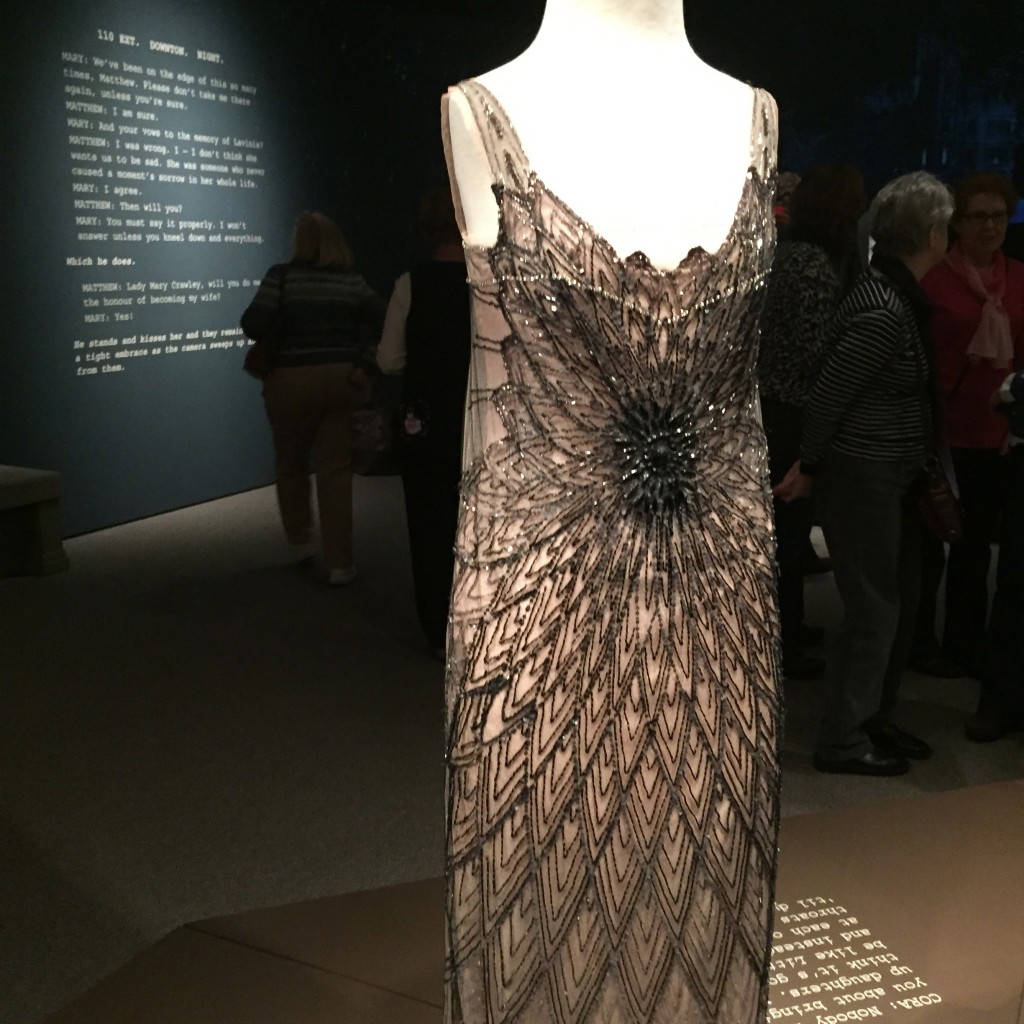 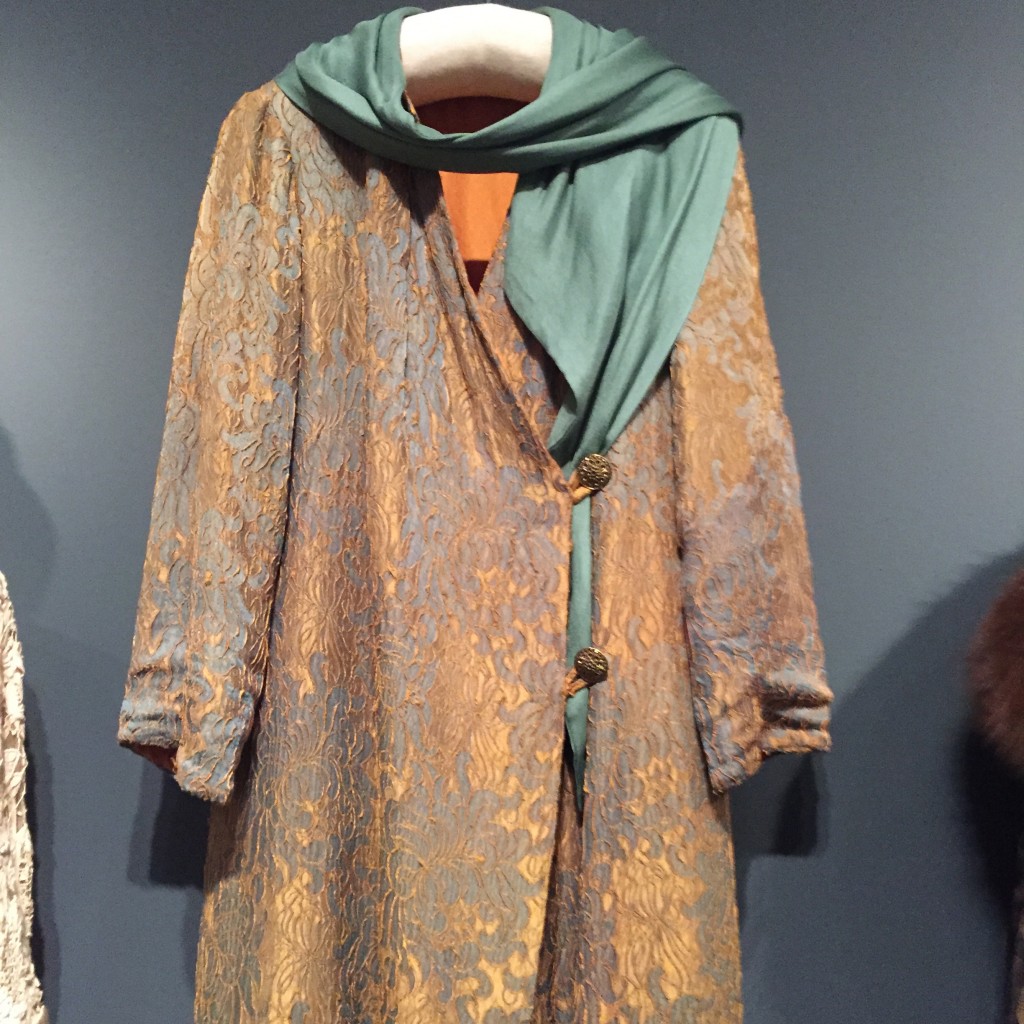 Tune in tonight, January 10, 2015, 9 pm EST to your local PBS station to see what’s in store for the Crawleys and for the fabulous clothes circa 1925.

Cheers to the return of Downton Abbey, season 6!

Season 6 (and alas the final season) opens with the Earl and Lady Mary hosting a hunting party on the estate so I thought I’d share some photos of our Christmas trip to England where we attended two hunts–one in the village and one on a private estate. 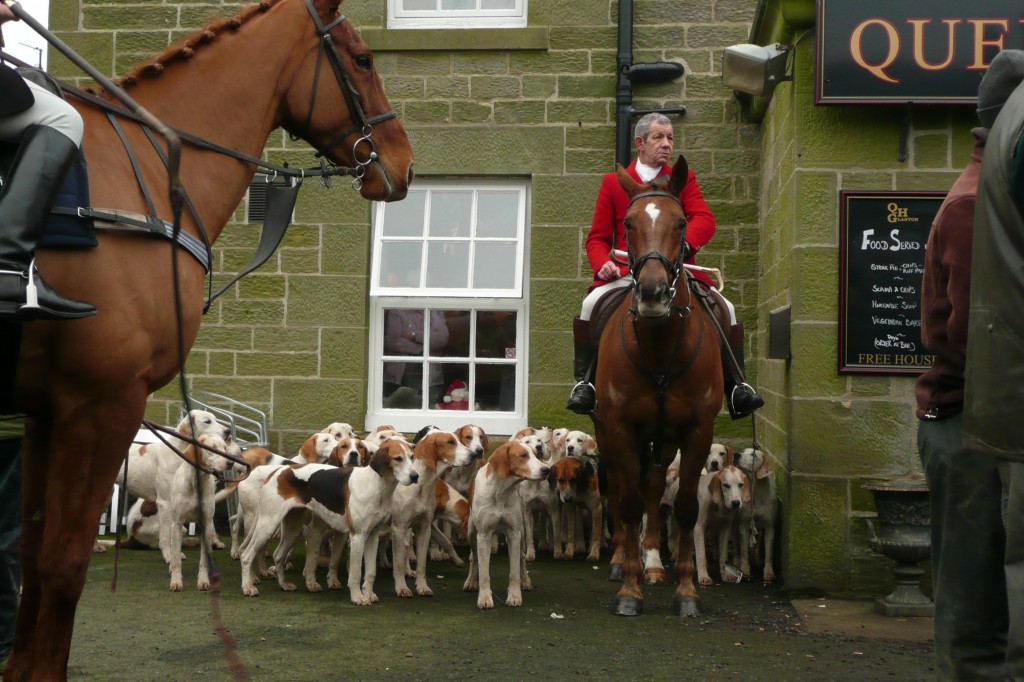 Master of the Hunt in his ‘pinks’ (the scarlet riding jacket.) 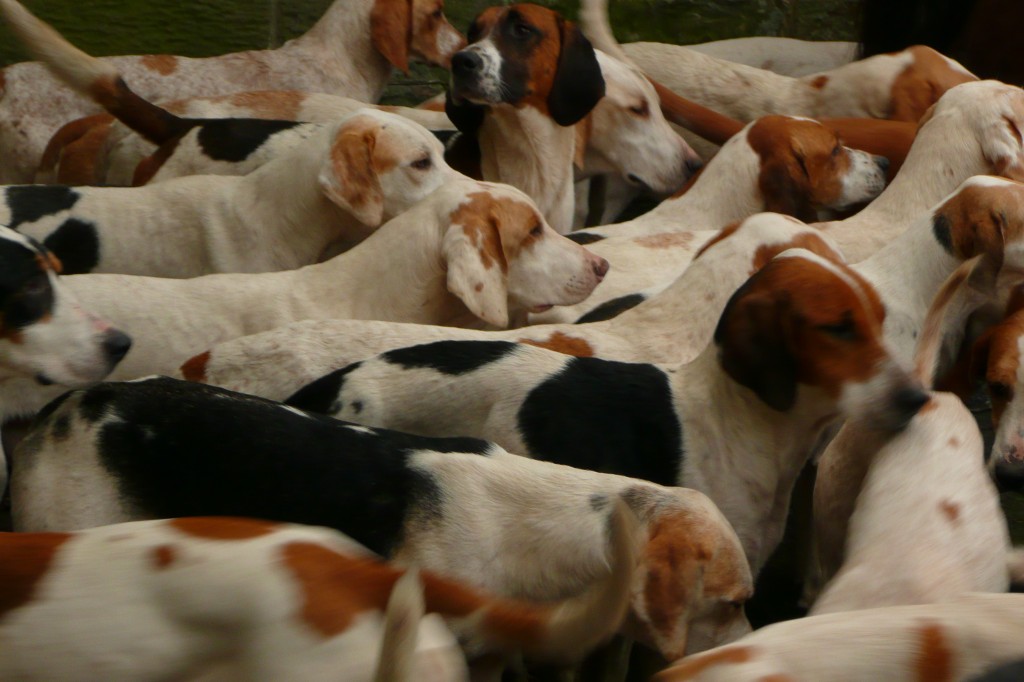 The hounds were very excited to start running.

Hunting with an actual fox has been banned in England but the long-standing tradition continues with the dogs following a chemical trail.  I’m not advocating cruelty to animals; we were there to look at the horses and hounds and it was quite a spectacle. 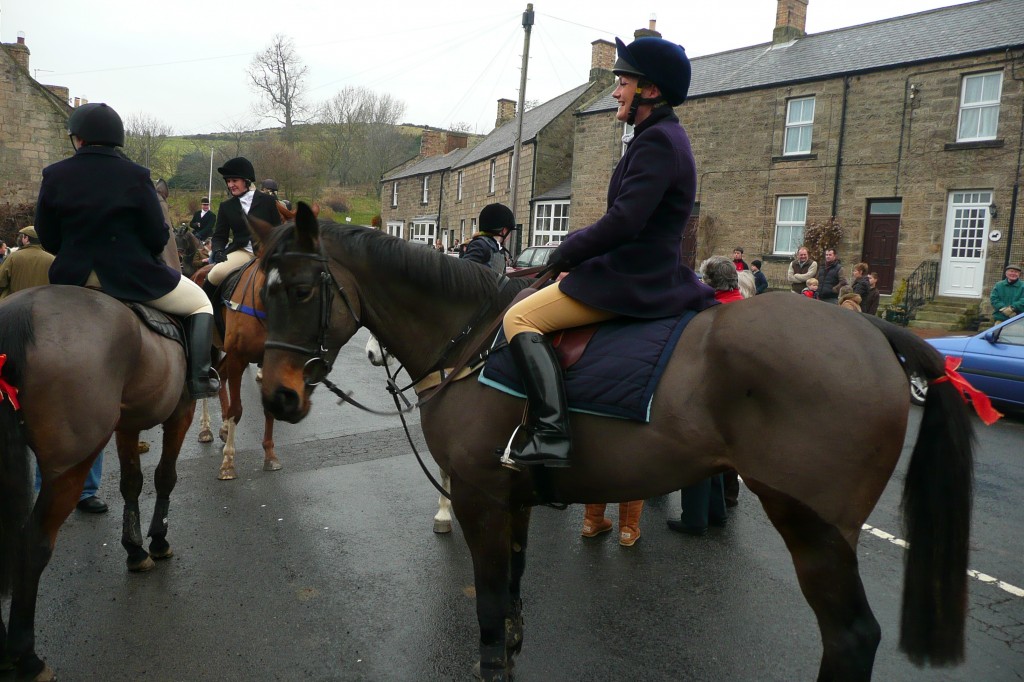 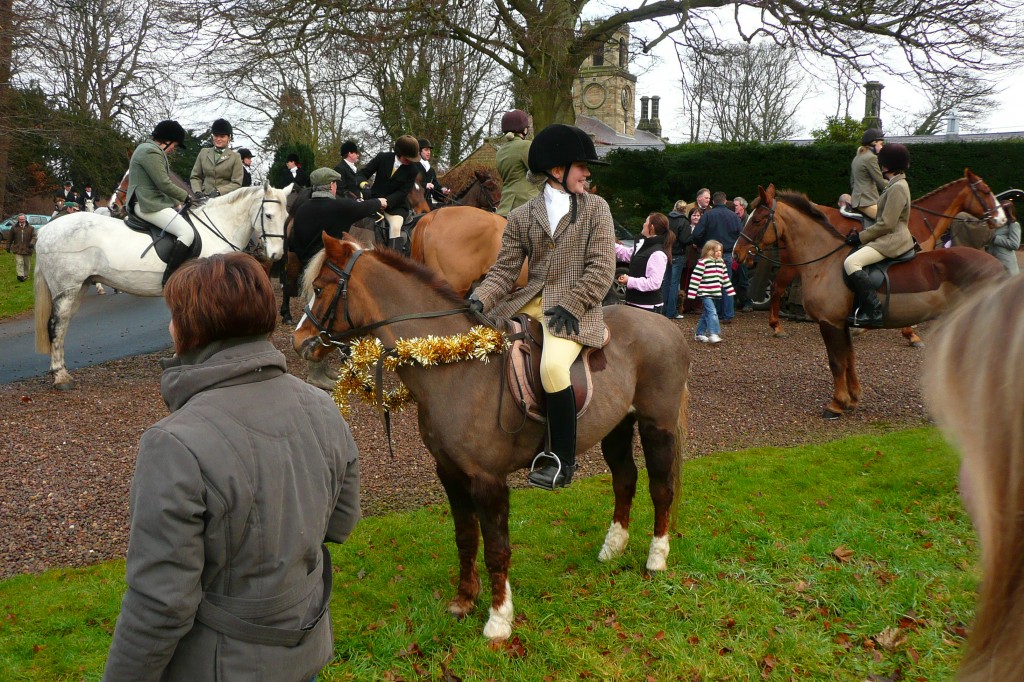 Sweet pony adorned for the festivity. 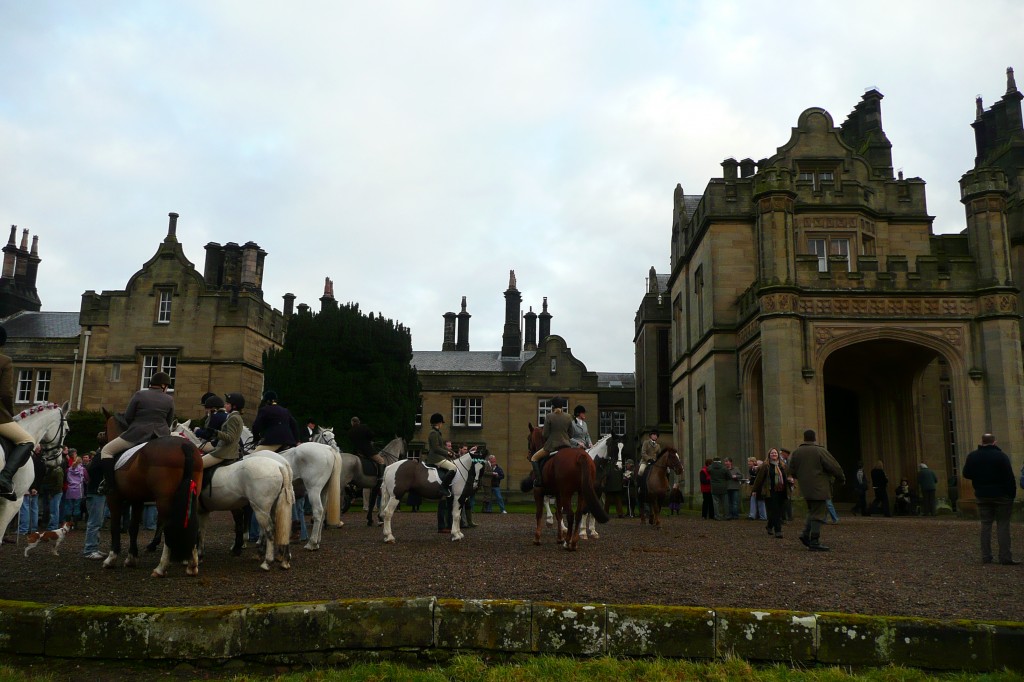 Looks like a scene from Downton Abbey! Where’s Lady Mary? 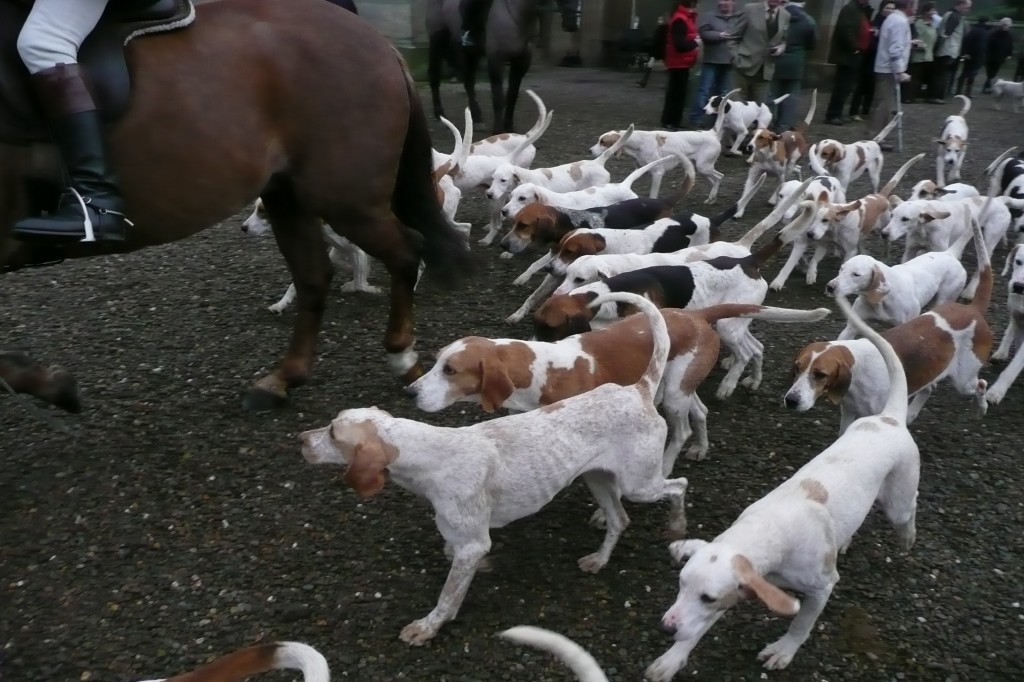 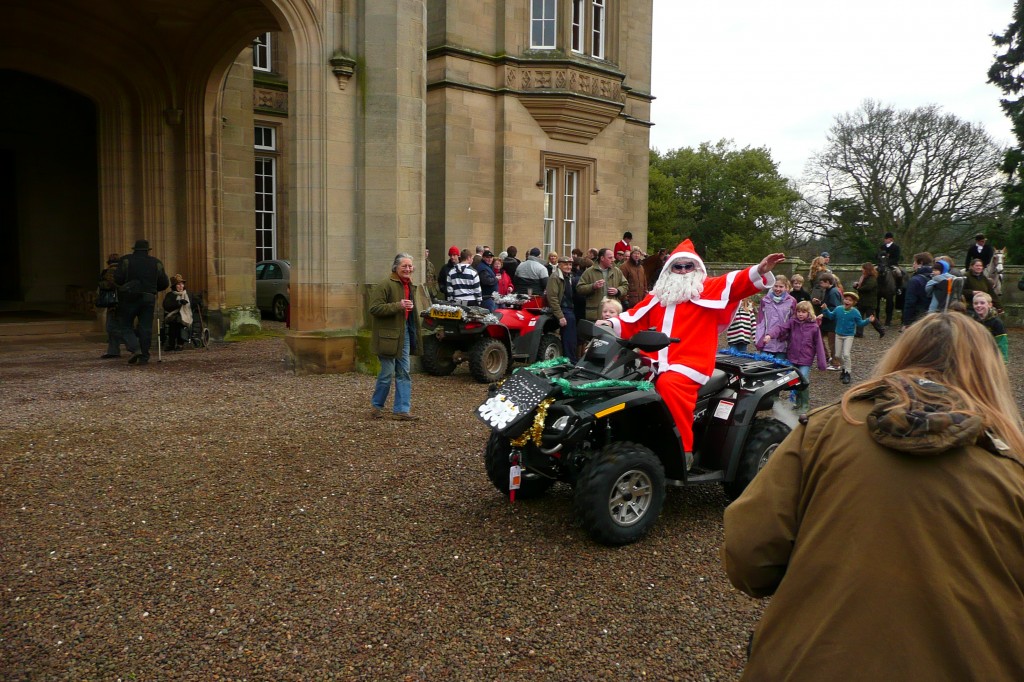 We know we’re not in 1925 when Santa makes an appearance on his ATV.

In Downton Abbey’s episode one you see the footmen serving bracing drinks (most likely strong brandy) in silver stirrup cups.  Some estates and hunts have a signature hunting party quaff, like blackberry brandy to warm up the insides on a chilly ride.

Afterwards there would be a hearty hunting breakfast with sausage rolls, bubble and squeak (casserole of cabbage, sausage and vegetables), salmon kedgeree, little mince pies at Christmas, rashers (bacon), cold lamb, ham or game with a bread sauce, toasts and breads with homemade jams and marmalade.

This recipe for a wonderful beef stew would make Mrs. Patmore proud and would be welcome anywhere on a cold day.

It is a melt-in-your-mouth hearty stew that I’ve adapted from Ann Hodgman’s “Beat This” cookbook.  You can cut up everything the night before if you want to save a step and don’t mind your potatoes turning brown.  (Keep meat and vegetables in separate gallon ZipLock bags.) It does take 5 hours in a low oven and that’s the secret to its tenderness.  So get out out your book or tackle your laundry pile (or queue up your Downton past seasons) and prepare to hunker down in the house while the savory smell tempts you for dinner. 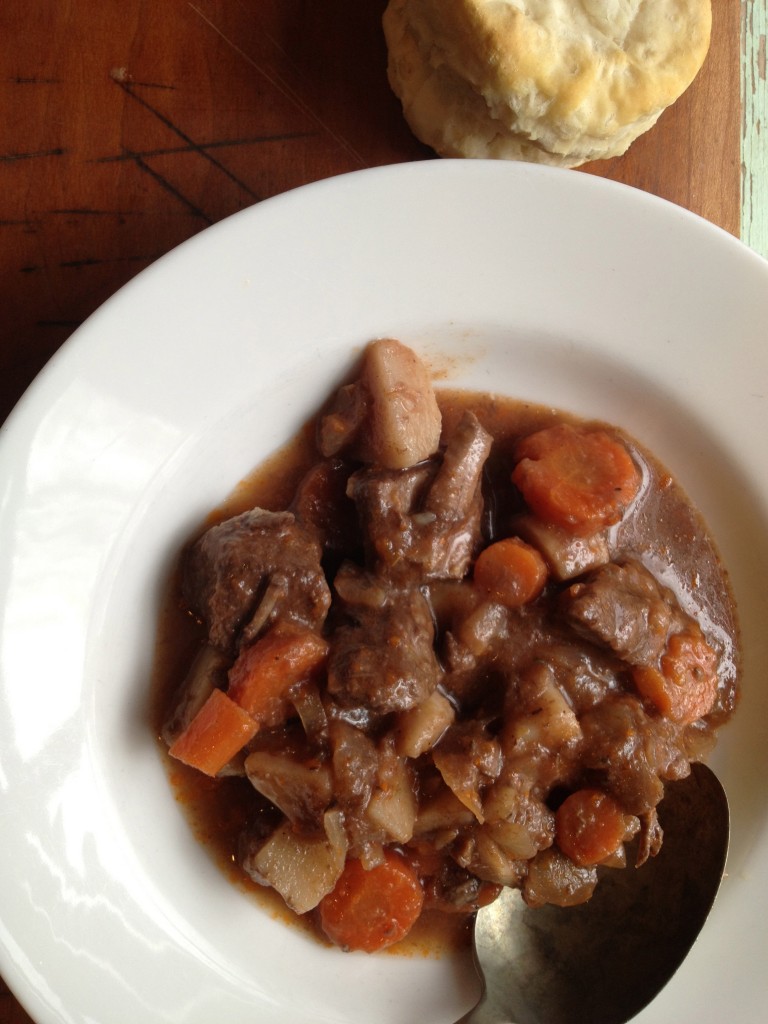 Combine the beef, veggies and bay leaf in a lidded casserole dish–a Le Creuset dutch oven is perfect. Sprinkle the seasonings over all and mix well. Combine the soup and your liquid of choice in a small bowl and pour it over the stew ingredients. Stir to coat and add more liquid if it’s not enough to cover. Cover the dish tightly with aluminum foil and then with the lid.  This will seal your braise.

Bake the stew for 5 hours (she recommends checking to make sure there’s still liquid halfway through, but this has never been an issue for me–make sure there’s enough liquid to start and then don’t peek until the 5 hours are up).  Again, a heavy-bottomed ovenproof pot is a must.
Serves 6 (Not in my house–my husband loves this stew and will eat 1/2 the batch!) I’ve never tried to double it for a party because my pot isn’t big enough.  You could try cooking 2 batches at the same time to feed a crowd if you had 2 big ovenproof pots and enough room in your oven. Might need to go a little longer on cooking time as two enameled iron pots would absorb more heat than one.   Leftovers are marvelous–even better after 2 days. Freezes well also.