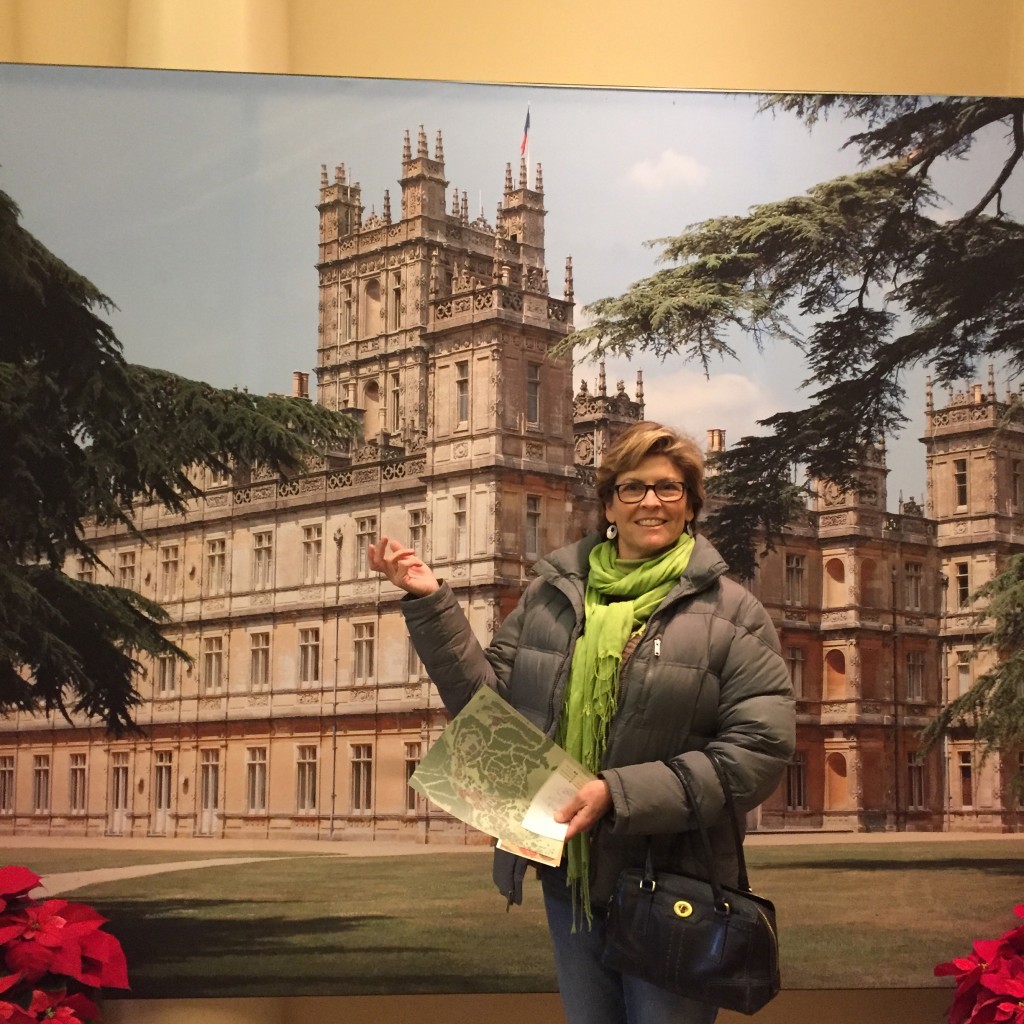 My friend Alyson posing in front of photo of Highclere Castle, the shooting location for Downton Abbey

One snowy morning in December my favorite gals and I took a road trip to Wilmington, Delaware to see the Costumes of Downton Abbey exhibit at the Winterthur Museum, Garden & Library.

We are all fans of the show (and especially the sumptuous gowns, hats, and jewelry and fashions of the 1920s), so we made plans to visit the country estate of Henry du Pont, a remarkable American house built in 1837 comprising almost 1,000 acres (60 of which are dedicated to the botanical gardens.)

The estate (and its 165 rooms) were decked out for Christmas so we also secured tickets for Winterthur’s annual Yuletide tour which this year featured trees, decorations, flowers, and vignettes that would have been displayed by the family in the period from 1920s – 1940s.

Remember Lady Sybil’s shockingly modern Parisian harem pants in Season 1?  They were there.  Beautiful in teal and turquoise silk chiffon. 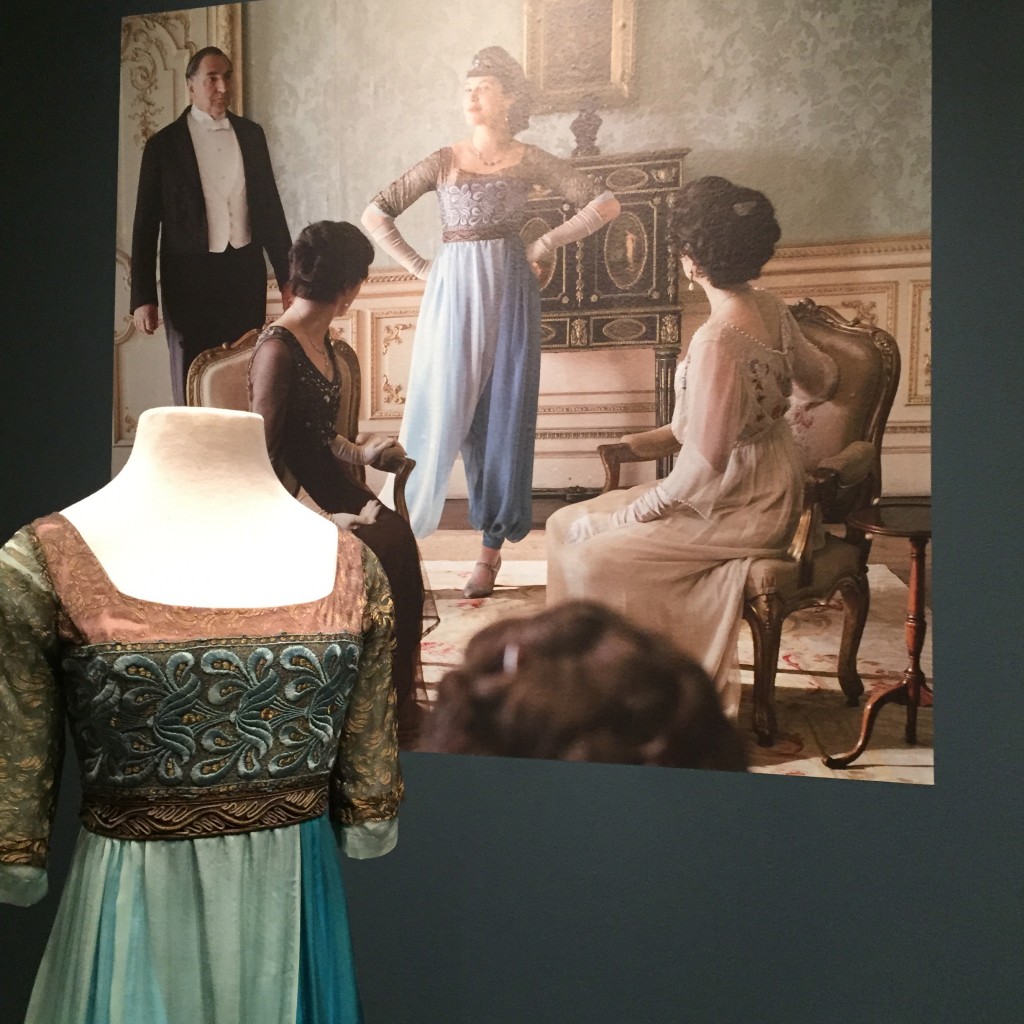 Shocker! A Lady wearing pants! Even silk chiffon, flowy pants that look like a dress.

Really, Matthew? What took you so long?!

Lady Mary and Matthew’s romantic marriage proposal in the snow in front of the Abbey was also a highlight.  We loved that the museum not only had a floor-to-ceiling film clip with dialogue and music from the proposal scene behind the costumes, but also had a visual light effect of snow falling so you felt you were there with them.

We loved that you could see up close all of the intricate detail of the clothes – the beading, embroidery, velvets, silks, crystals, and perfect stitching.  The exquisite construction of the garments blew my mind.  Since I can’t even sew a button on, I couldn’t imagine how the show’s seamstresses (there is a large team working around the clock for 6 weeks during production) construct the costumes from vintage remnants from the period and keep them maintained and preserved throughout multiple scene and costume changes.

One of Lady Cora’s gowns. Dressed for dinner. Do not under any circumstances spill gravy on this.

The show’s costume designer painstakingly researches the historical accuracy of the 1920s fashions, tracks the historical fashion trends from France to England to America, and shops the vintage continent for inspiration and to find real remnants of gowns on which to base the costumes. 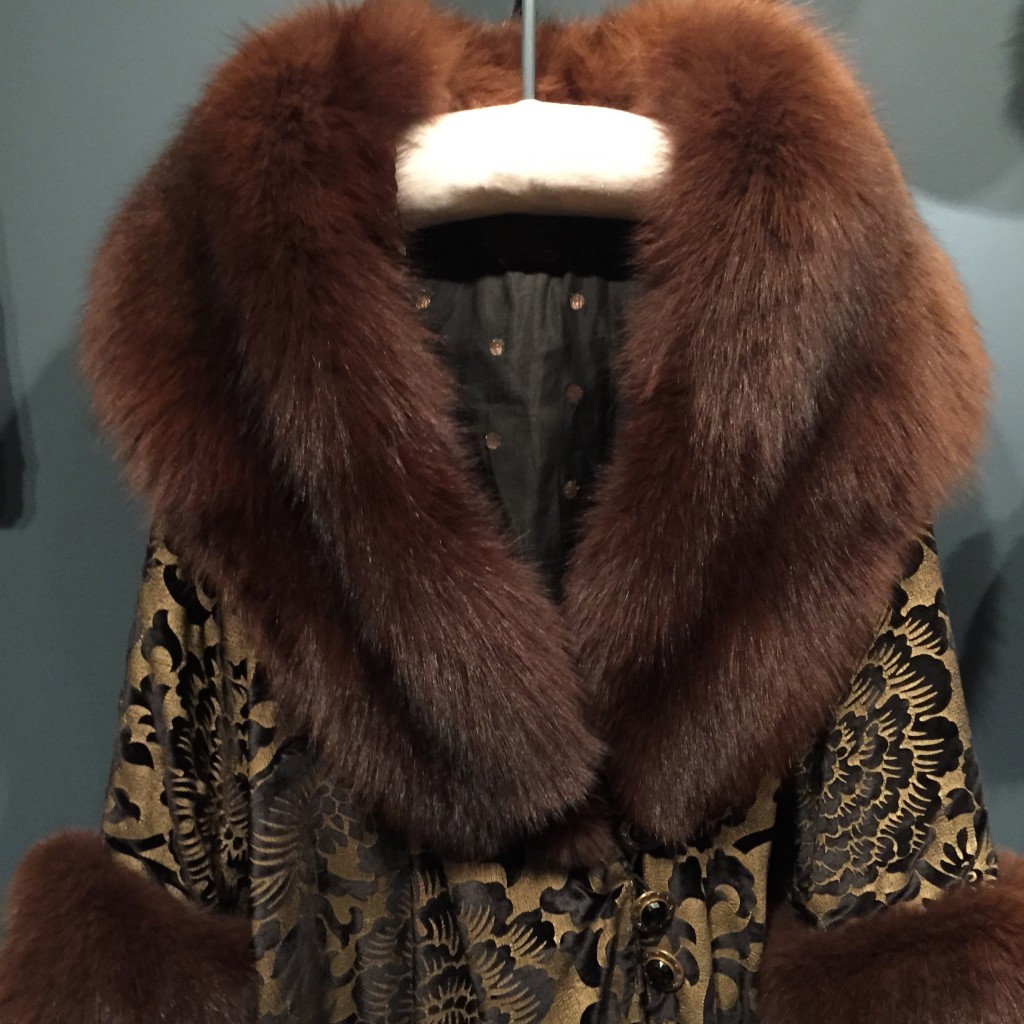 Of course it wouldn’t be a complete Downton Abbey experience if we didn’t see what they wore downstairs.  On display were the kitchen cook and maid’s uniforms, the butler’s uniform, the footmen’s livery and kitchen artifacts that would have been used in an aristocratic English estate in the 1920s.

Mrs. Patmore! You are looking rather invisible. 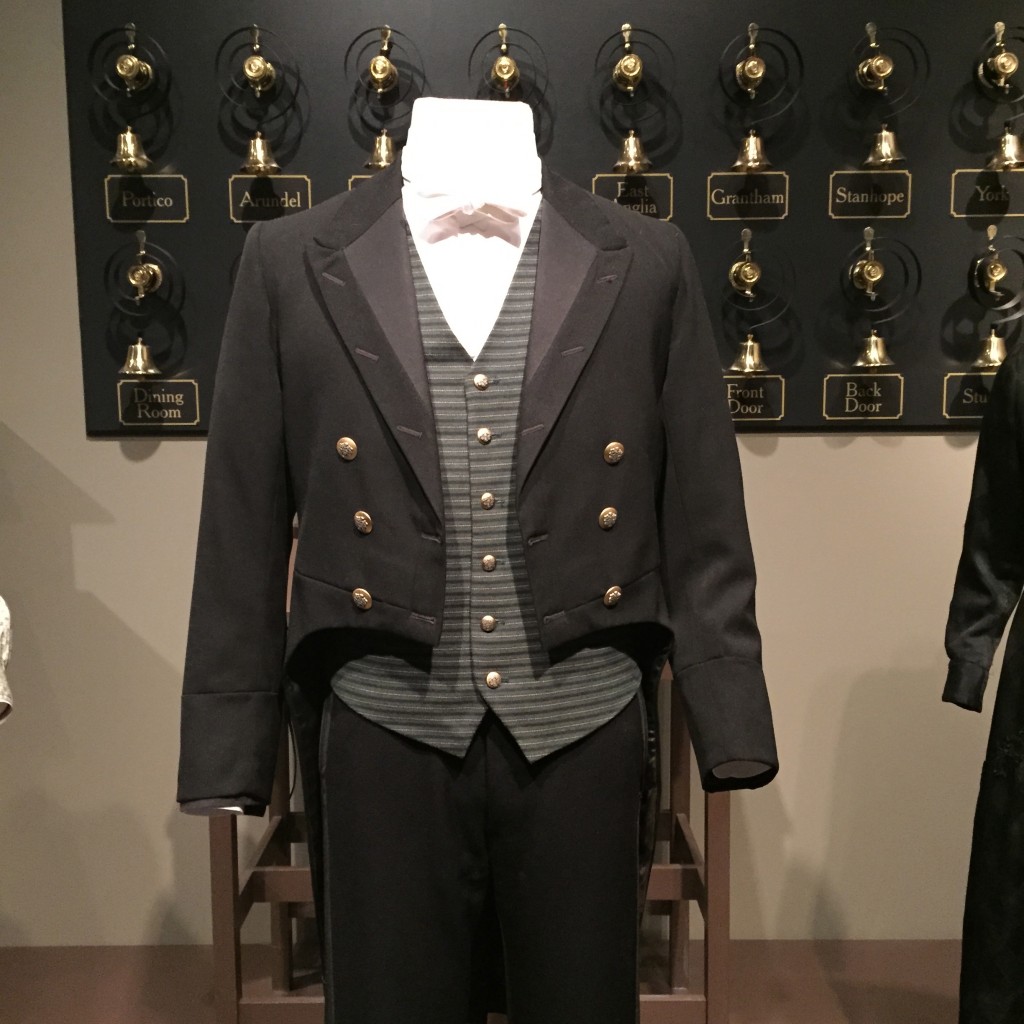 Footman’s uniform in front of the bells used in the show. Which of the named rooms do you think is Mary’s: the Stanhope or East Anglia? 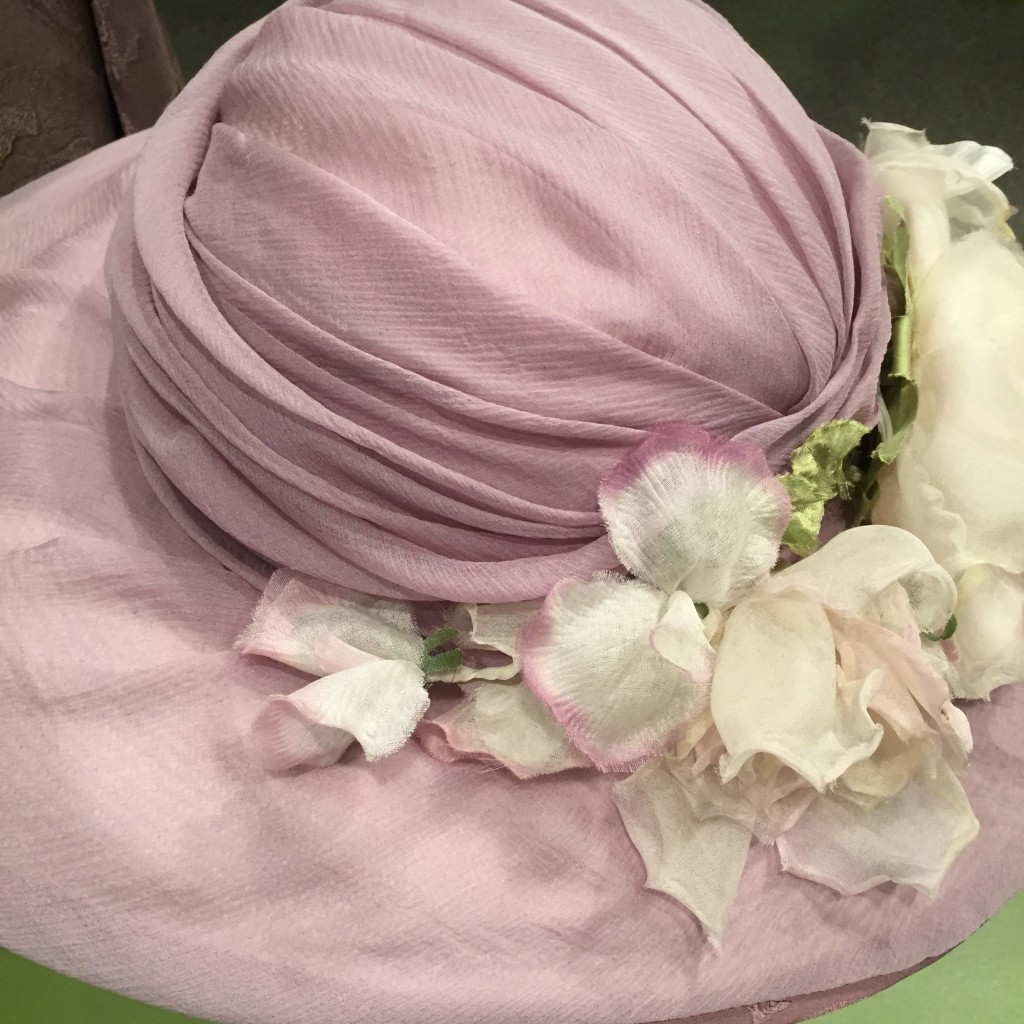 And let us not neglect the hats, the gorgeous hats.

(It wasn’t long ago in America that neither lady nor gentleman would leave their home to go out in public without their fashionable hat or their gloves.  Now it seems everyone shops in public in their pajamas or their underwear.  Do I sound like the Dowager Countess?!)

Speaking of shopping, the exhibit had a cute pop-up store filled with fun things inspired by the show and the era.

I bought one of the cast iron WC (water closet) emblems for my American-British gal pal who has a country house from the era.  Perfect! 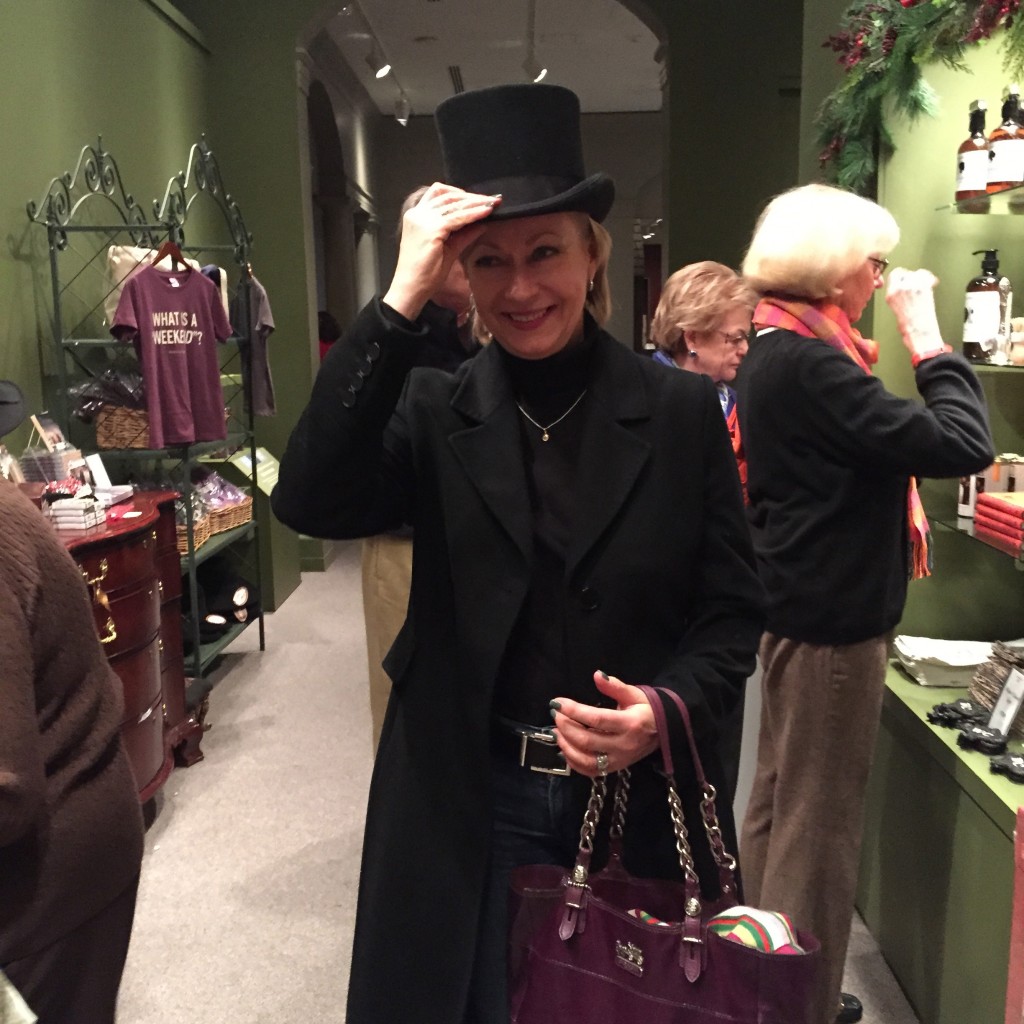 Lady Marjorie ready to mount her Steeplechase horse and give Lady Mary a run for her money.

We had to try on some hats in the shop.  This equestrienne topper looked marvelous on Marjorie with her black wool winter coat and turtleneck.  Truly, she could have been popped right into the hunt and traded quips with Lady Mary.

There is more to share and I’m looking forward to showing you the photos from the house tour as well.

Tune in to your PBS station tonight friends, January 4, 2015 for the premiere of Season 5 of Downton Abbey and catch up with the Granthams in 1924.