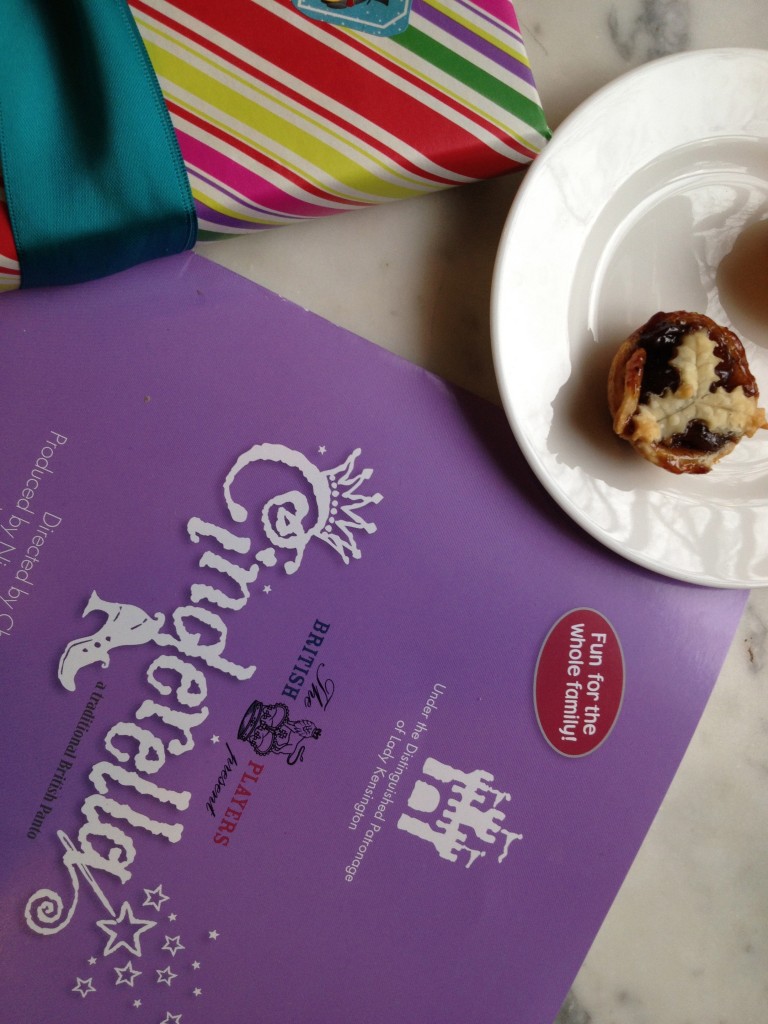 Pantomime is an eccentric British theater institution.  Usually performed at Christmastime, pantomine (slang, panto) emerged during the Restoration with roots in the commedia dell’arte of Italy.  By the beginning of the 19th century, this wonderfully strange, campy, corny, quirky mix of musical comedy and fairy tale had become a tradition.

Young Queen Elizabeth and her sister Princess Margaret performed in these musical comedy stage productions around Christmas and New Year’s, as pantos were a big part of their holiday celebrations at Windsor Castle, where they lived after evacuating from Buckingham Palace during wartime.

John, Joe and I attended our first Christmas panto in England at a village theater in the north.  Pantomimes rely heavily on audience participation (that’s a main part of the fun) and when the lead character called for a TALL volunteer, we pushed John into the fray. He played a door and a Christmas tree, much to his chagrin and our glee.  Later on in the village, we passed two children in the shops who pointed at John and said, “Look mummy!  It’s the door!” 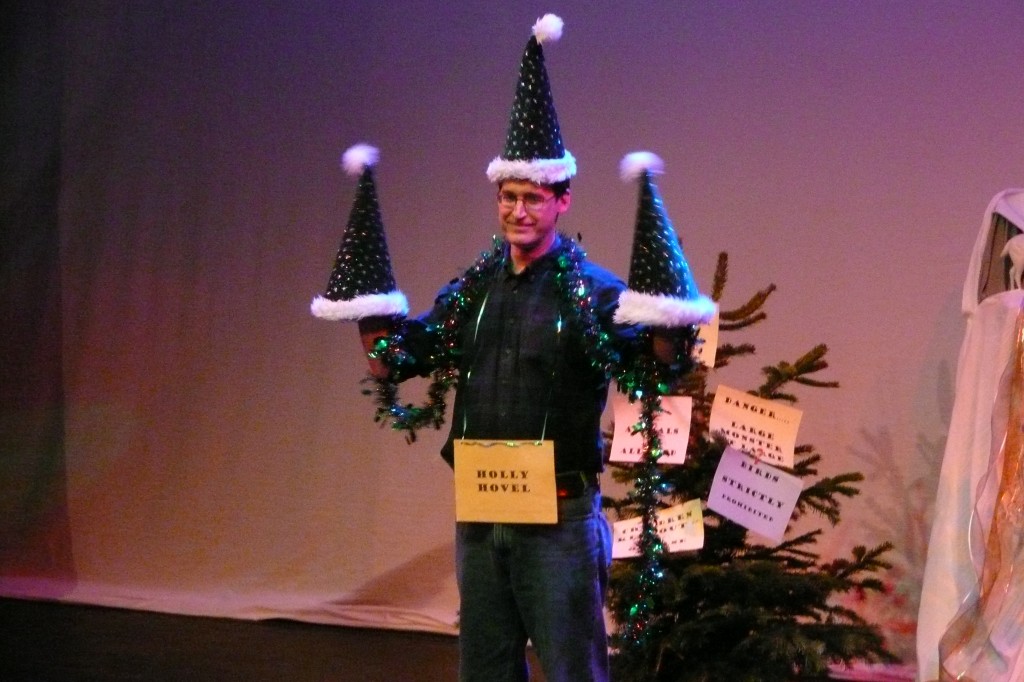 JP endures the indignity of being a prop in the 2008 panto in England.

Back at home in Maryland, we have the beginnings of a new Christmas tradition with our friends, Chris and Adrienne Harrington.  The British Players (formerly The British Embassy Players) mount a Christmas pantomime production at the Kensington Town Hall each year.  This year was Cinderella, a traditional British panto directed by Charles Hoag.  Chris purchased a passel of tickets for several friends and their children and away we went.  After the play we adjourned back to our house for dessert and hot chocolate.

I set up an assortment of cookies and treats in various shapes, sizes, flavors beforehand on the buffet.

I knew I wanted an abundance of offerings but couldn’t make it all, of course, so I baked some homemade cookies and bars and rounded it out with my favorite seasonal treats from Trader’s Joe’s. 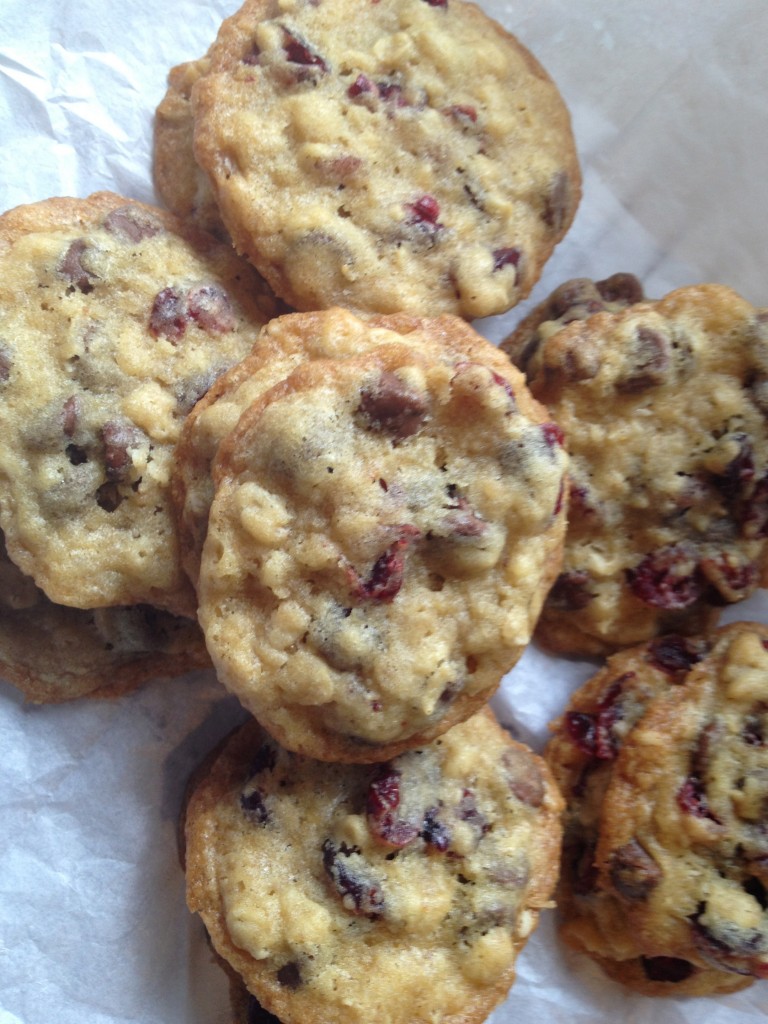 These are everyone’s absolute favorite cookie. I think I made at least 9 dozen throughout the Christmas holiday to eat and give as gifts.

I found the recipe at one of my new favorite blogs, She Wears Many Hats.  This is a vintage recipe, dating back to the 1900s, but no one seems to know why they are titled ‘Chinese.’  Some recipes call for dates and walnuts, but I followed She Wears Many Hats and made these with just pecans.  They were like a blondie without chocolate.  Chewy in a good way with lots and lots of brown sugar. 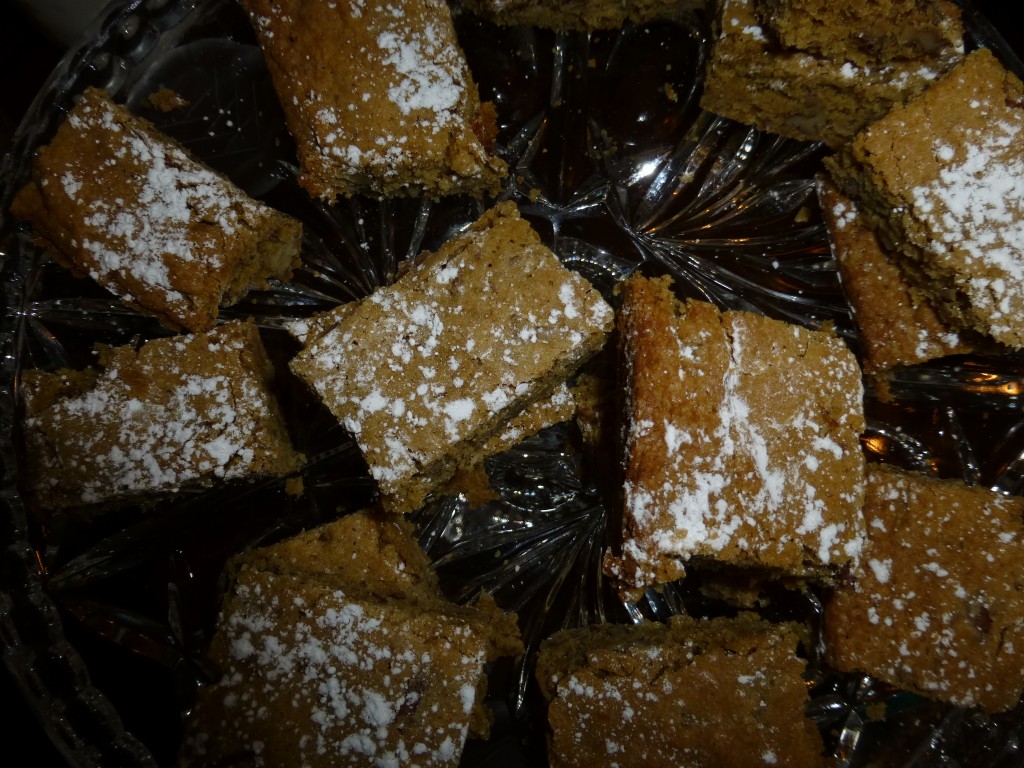 I made a batch of Sugar Cookies with Sprinkles for those who don’t like chocolate or nuts.  I can’t say I was blown away with them (why are sugar cookies so hard to get right?) so no recipe to recommend. 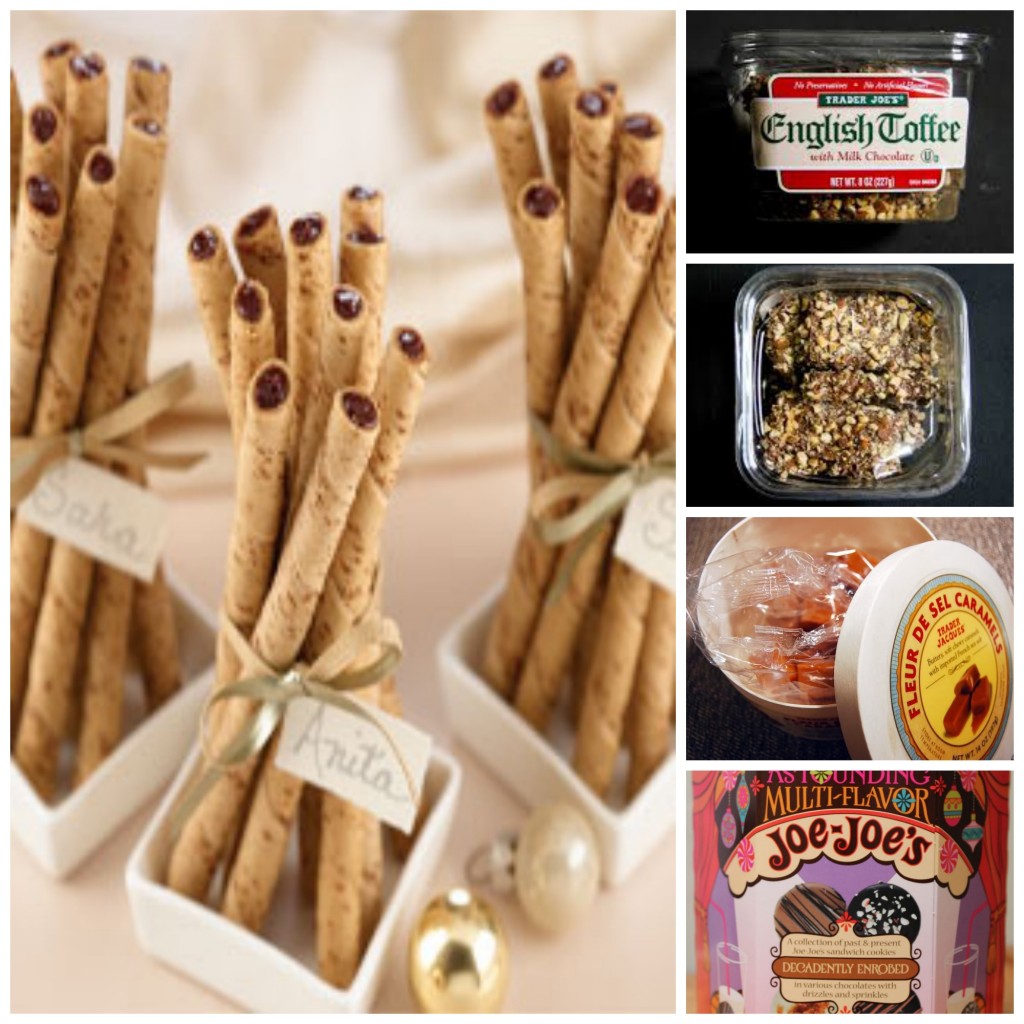 And Walker’s Shortbread (our favorite at Christmastime.)

Everyone at our house gets shortbread in their Christmas stocking. 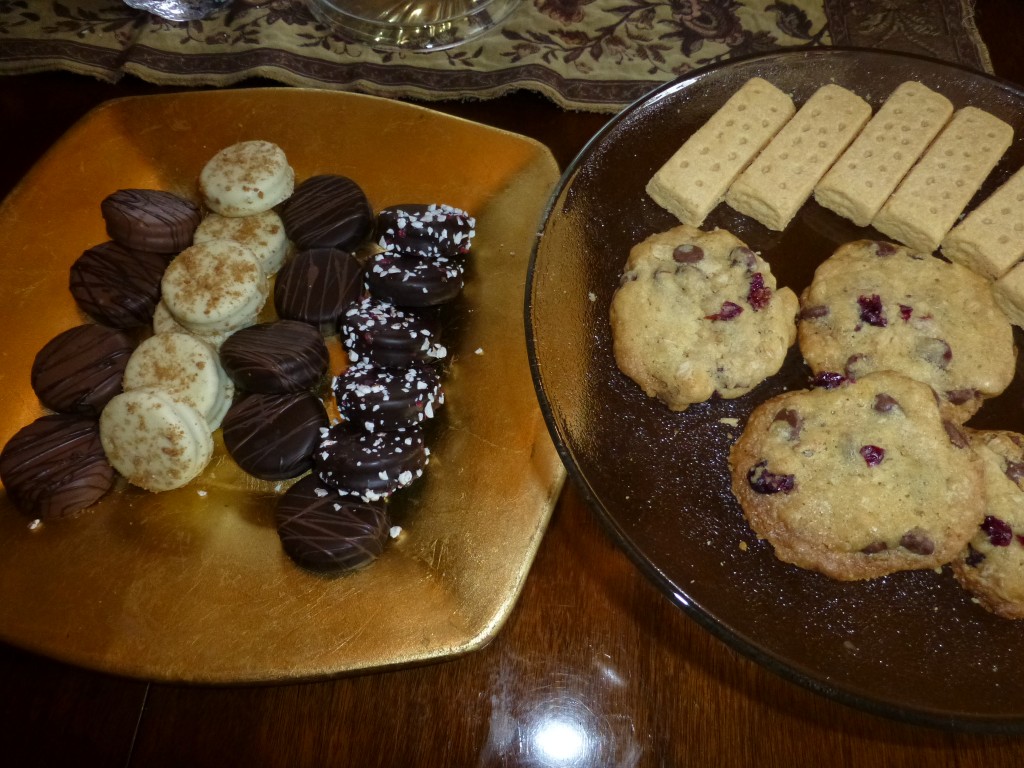 We decorated the front porch with candy canes, garland and mini trees. 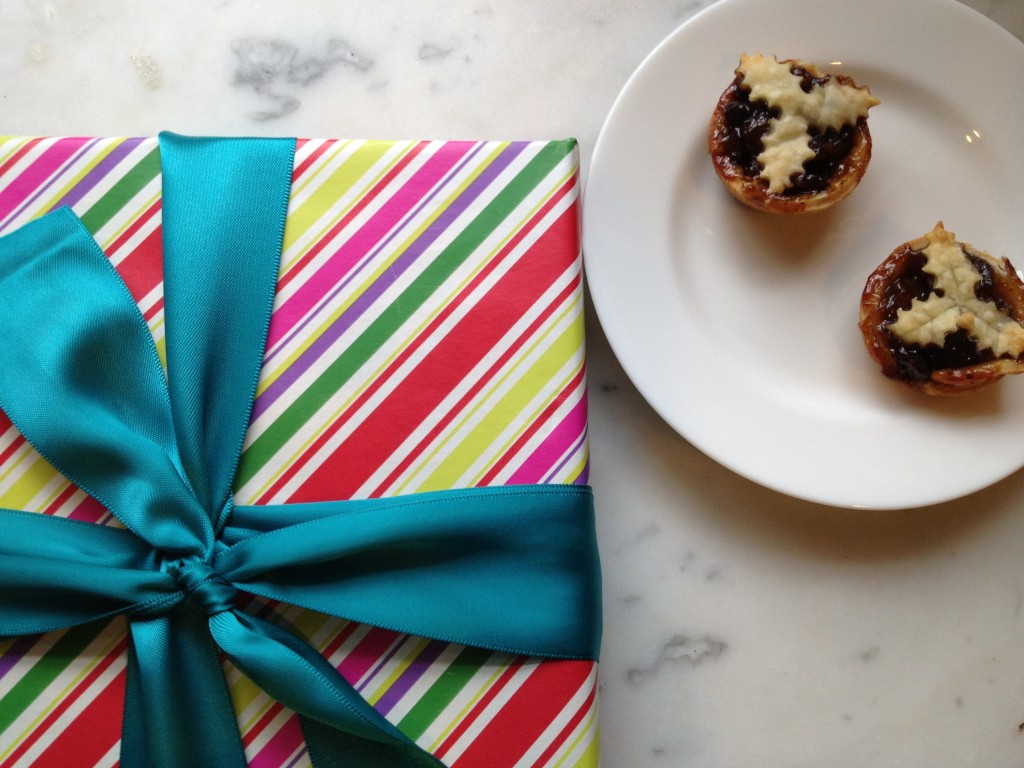 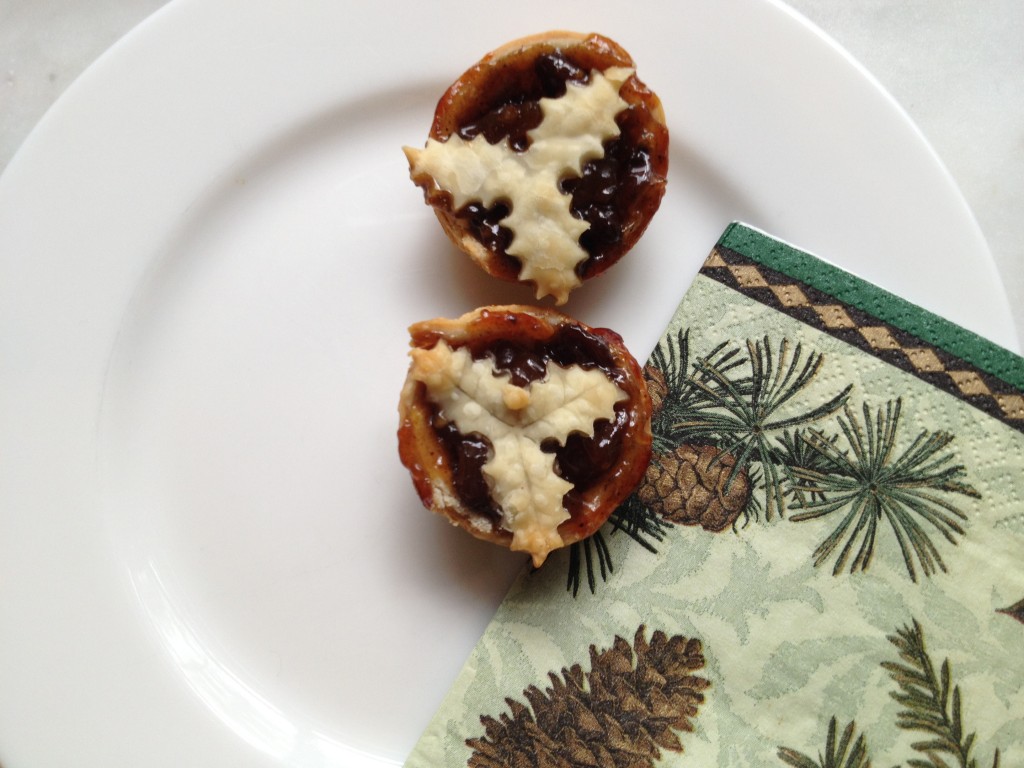 Another lovely friend brought a big bowl of Chocolate Mousse and the children had hot cocoa with mini marshmallows and candy canes. 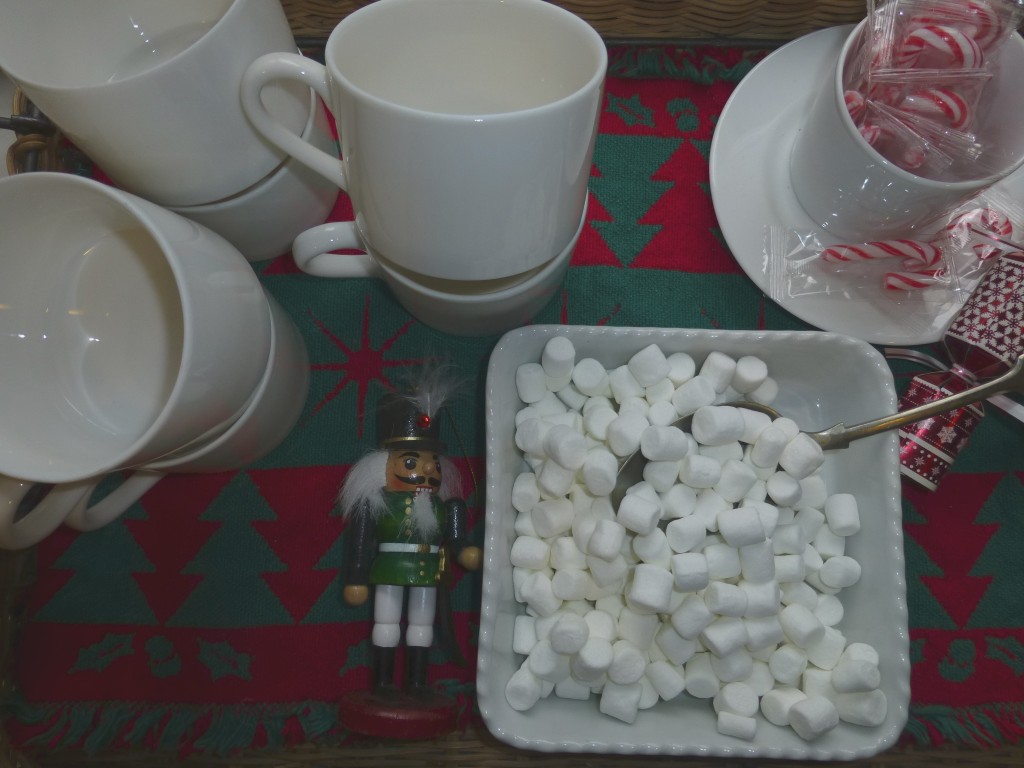 Santa made an appearance.

We had some savory treats also (because I like salty and crunchy better than sweet.)

Keeping it English, I put out a Stilton and a 5-year aged white cheddar (both from Trader Joe’s cheese section.)

We passed around a bowl of Spiced Pecans and a bowl of smoked almonds, both excellent with the various sparkling wines we served. 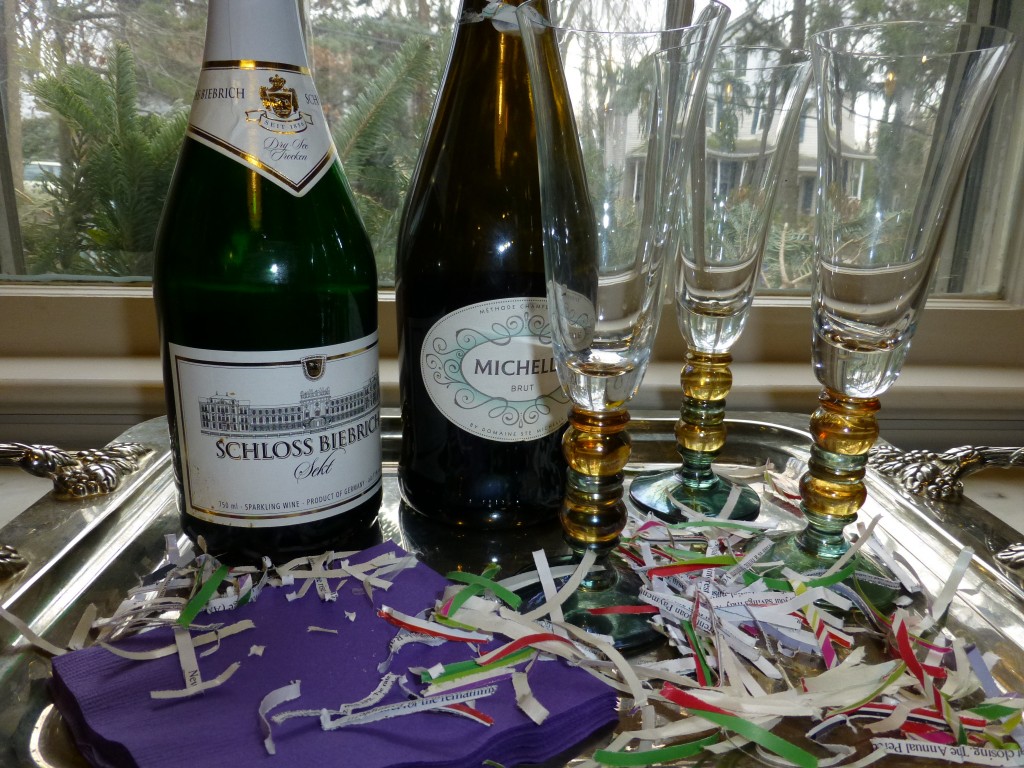 And let’s not forget my favorite potato chip:  Kettle Brand Salt and Pepper Chips. Because it’s not a party without a potato chip, in my opinion.

We served an assortment of beverages, including lemonade, Pellegrino, Coke and Diet Coke, Capri Suns for the kids, white and red wines and IPAs for the adults.

I had planned to offer coffee and put out the china cups and saucers beforehand, but we totally forgot to brew it or offer it.  Since the play didn’t wrap up until 9:30 pm, this was a late party and no one asked for coffee as I’m sure they wanted to go to sleep at midnight with visions of sugar plums in their heads. 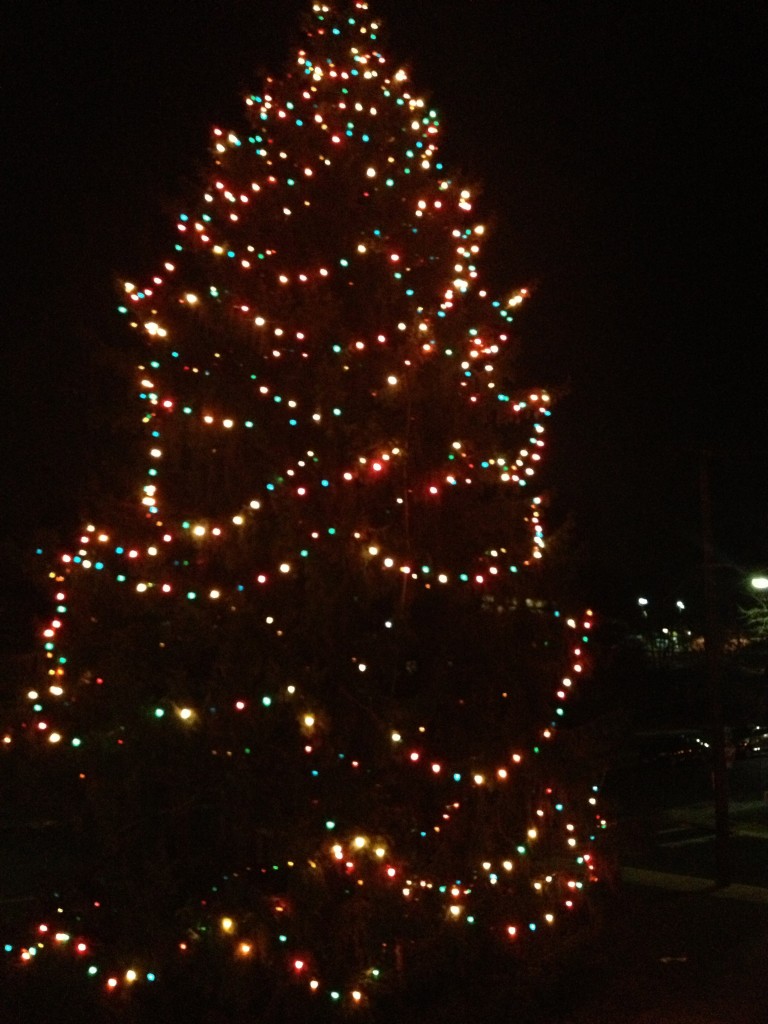 The marvelous tree at Kensington Town Hall, large and festive.

Hope everyone had a happy Christmas!  Thank you, Chris and Adrienne for the panto tickets and the lovely new Christmas tradition.

One thought on “A Traditional Christmas Panto”